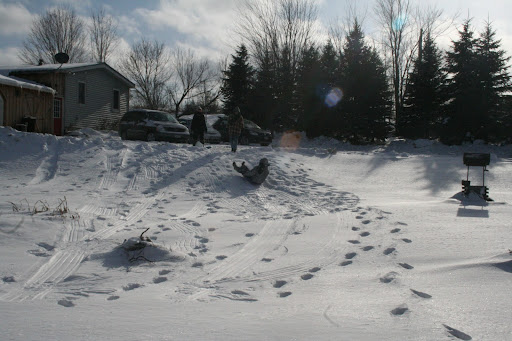 We got about four to five inches of snow yesterday and I got a chance to take the 8n out for the first time and use it. Everything went good last night even the headlights worked and the generator kept a good charge in the battery.

In my mind my tractor looks as good as this one. The look is somewhat closer to what is below.

This morning I went out to do a little clean up and the tractor fired right up. I made one pass up the drive where the cars were parked last night and it stalled. Figured I needed gas as I had added any after using it for about thirty minutes last night. After putting gas in it started right up rang about two hundred feet and quit again. I was hungry and it started raining so I went back in and got breakfast.
When I came back out the rain had turned to snow and the tractor started up and died almost immediately. I checked the sediment bowl and it was full of crud. Found a pair of pliers removed the bowl and dumped out the gas. Put it all back together again and finished cleaning up where the cars were parked.
Back in the garage I turned off the ignition, turned off the gas, and disconnected the battery. All set for the next storm. I think I’ll have to clean out that sediment bowl a few more times.

Best Tools for Monitoring and Administering your LAN/WAN network better!!!: How to setup and configure Rancid integrated with …:

I used exim4 for mail and it was installed by default. Edit /etc/aliases and restart mail “service exim4 restart”.
Everything pretty much worked out of the box.

I’m starting to plan for vacation this year and when I do this, I begin to think of vacations from my past.
There was the trip to Florida/Kentucky/Pennsylvania when I was a kid, that set the bar for everything else. My oldest sister stayed at college a bit long so she could avoid the vacation. Mom, Dad and the four kids all piled into the car for the trip down. The car was a 1970’s Ford LTD wagon with a slipping transmission, broken AC, and an exhaust leak into the back. I think Dad said the exhaust leak helped to keep us kids a little calmer.
We packed everything in and headed out. We made it down to Gettysburg and then some money was borrowed from Beneficial Finance, so we could get back home. Did Dad forget to pack the vacation funds? Before we left Mom and Dad argued about going to Florida or Kentucky. Dad was for Kentucky and Mom Florida, as it turned out Pennsylvania was the final destination.
We spent a very good week around Gettysburg, visiting the battlefield and in general having a good time. We stayed in a motel with a kitchenette and two rooms, all six of us.

The motel had TV with Buck Rogers, the old black and white version not the newer colour series that came out later on.

We drove to Hershey and didn’t visit the amusement park because that was to much, when we got to the gate and found out the cost. We visited a wax museum near Gettysburg and toured the visitors center museum there. For years afterwards I had a copy of the Gettysburg address and Confederate money that I bought while we were there.
We had sandwiches in the car with the windows rolled up because it was raining, the temperatures were in the high eighty’s. Wonder bread, bologna, and warm mustard. The humidity so high you fingers went through the Wonder bread and the bologna was warm. We stopped on the way back to upstate NY and visited a water park near Durham in the Catskill’s.

That was the only vacation that I recall from my childhood.